Posted on June 8, 2014 by curtsavagemedia 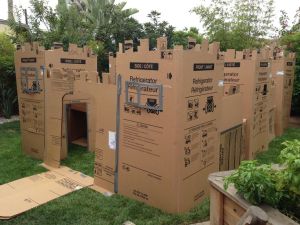 Did you ever have a secret hideout when you were a kid?  Maybe a tree-fort or a clubhouse built from old produce crates and pallets?  When I lived in apartments in LA, we had to use abandoned warehouses or old semi trailers for hideouts.  Some of my school friends from the wealthier side of town had custom built clubhouses that resembled little efficiency apartments complete with bathrooms and refrigerators!  We liked hanging out with them!

I remember secret hideouts changed as I grew older.  When I was five, my hideaway was simply a collection of large cardboard boxes taped together and painted with warnings to “Keep Out!” and “No Girls Allowed!”  These were important advertisements.  If anyone dared look in my bunker and saw me, then my whereabouts would no longer be a secret.  If a girl happened to wander into my “man cave”, that would be disastrous!  That would mean the whole place was contaminated with cooties and the boxes might as well be hauled out and burned!

When I was 10 or 12, clubhouses became a bit more elaborate.  They were built from wood and had working doors and windows.  Tools had to be purloined from unguarded toolboxes.  We brought ice chests stocked with a day’s worth of food and sometimes even ran several extension cords from the nearest outlet so our place could have electricity – you know – for the record players.  Rules for admittance were still pretty much the same – no adults and no girls; we did make a few exceptions though.  We started realizing some of the neighborhood girls were pretty cool.  They could get tools or building materials we needed and sometimes they brought stuff for us to eat.  These attributes guaranteed life membership!  They also had some great records.

The whole point of secret hideouts had been to get away from adults and girls so we could be wild boys in wild and undiscovered places all by ourselves.  A day spent in such a state felt like an entire week on the calendar.  After an entire summer spent hanging out in our clubhouses, there was a sense we had somehow completed a rite of passage; a sense that beards might suddenly pop out on our faces at any moment.  I have no idea how a bunch of “wild” boys grew into teenagers who preferred thinking about cars and teenage girls over building clubhouses.  We sat on lawn chairs in our parents garages – our new “hideouts” – and pondered those things.

Some of us married those girls who were once told to “keep out” and we even had a few kids.  Tell me – while watching your kids build their own secret hideouts, do you sometimes catch yourself thinking “I wish there was still a place where I could go and hideout; a place where I could have privacy and peace.”  I have good news for you.  There IS still such a place!  It’s called the bathroom, and it’s all yours until any other member of the family wakes up.  So, for those few precious moments of your day, turn back into a “wild boy” and enjoy your MAD magazine in your “secret hideout”.