Posted on August 3, 2014 by curtsavagemedia 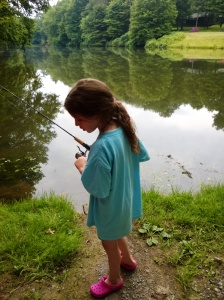 I probably should’ve checked to make sure her brother returned all the gear he borrowed last time he went camping.  By the time we got out of the store with new equipment, fishing gear and groceries for the weekend, it was supper time.  My daughter’s first “camp dinner” would have to be from McDonalds!  We arrived at American Heritage Girls Family Camp just as registration was finishing.  We got the tent set up just before dark.  The kids were all having fun chasing each other around in the dark with their flashlights while the parents got a nice fire going and visited waiting for the girls to lose steam.  We made sure they all got safely back & forth from the bathhouse before bed.  Somehow, the door to the mens’ side of the bathhouse got locked;  we found this out when it was our turn to hit the sack!

I grabbed a flashlight and started walking in the direction of where I had seen the dreaded “pit toilets”.  I didn’t remember the gravel road being quite so long, or so narrow, or so dark.  I was thankful when the road led to an open field where I could walk along the wood’s edge in search of the ‘primitive potty “.  I finally zeroed in on the smelly shack.  After revisiting one of my least favorite camp memories, I was trying to get the sink spigot to work when I heard that sound you don’t want to hear in the woods at night.  I was about a hundred & fifty yards from what sounded like a bear!  All I can say is I’m glad the near-encounter was “post privy”, or the bear would’ve found out he’s not the only one who does something in the woods!

Friday was a field day full of fire safety & outdoor cooking classes, nature studies, archery, fishing, playing pirate on a scale wooden ship, and chasing all over the campgrounds.  The girls finished the day with a marshmallow challenge – they broke into teams to build a free standing tower using one marshmallow, 20 pieces of uncooked spaghetti, 20 inches of chord and 36 inches of masking tape.  My daughter’s team won by building the tallest tower!  Most of the kids were asleep by 9 after a very fun filled day.

Several families broke camp Friday evening and headed home.  Weather forecasters were calling for rain starting around noon on Saturday.  Those who remained lit lanterns to dissuade a closer visit by the bear and turned in around midnight.  Within an hour, we knew the weatherman was wrong.  Around 5am, I woke to find about an inch of rain inside the foot end of our tent!  After moving my daughter to drier ground, I relocated our stove to a spot under the roof overhang near the bathhouse and started heating water for coffee.  The kids played Hello Kitty Uno while the adults broke camp in a very soaked and rapid fashion.  We combined our remaining food into a nice group breakfast and then departed for our homes.  All-in-all, I think it was a successful camping trip – Naomi’s first campfire, her first Largemouth Bass, her first arrow in the hay bale, her first bear story and her first nights sleeping outside with her dad.  I’m already looking forward to the next camping trip with my girl!

This entry was posted in Uncategorized. Bookmark the permalink.