What Wise Communities Do 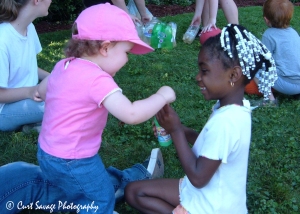 I took this photo of my 18 month old daughter playing with a new friend at a 2008 summer reading event at the New Castle, PA Public Library.

I had no solid ideas for an article this week.  Wednesday evening, I planned on setting up sound equipment in a meeting room and then sitting outside in the cafe sipping coffee and working on this column.  However, curiosity got the best of me and I ended up sitting in on the meeting.  By evening’s end, I knew I needed to share what was discussed.  Thursday’s news of more race related trouble in Ferguson, Missouri sealed my decision to write this as quickly as possible.

The theme for the public meeting was ‘Bridging the Gap”.  The meeting’s purpose was to build relationships and provide a platform for dialogue and understanding between members of the community and law enforcement officials, local government officials, social service agencies and local ministries.  Last night was the second time the moderated and panel-led group had gathered.  The evening’s panel was comprised of three pastors – Dr. Rich Noble, Pastor of Washington Union Christian and Missionary Alliance Church, New Castle, PA (panel moderator), the Apostle David Young, Pastor of Prevailing Word World Outreach Center in New Castle and Chuck Jewel, Lead Pastor / Worship Leader at New Creation Free Methodist Church, New Castle – Sidney McKnight, President of the New Castle Branch of the NAACP, Marisue Zorens, Director of the Sankey Youth Ministry of the City Rescue Mission, Robert Salem, New Castle Chief of Police and Joshua Lamancusa, Lawrence County District Attorney.  About two dozen other members of the community attended the meeting, but unfortunately, not many of them were the youth who really needed to hear the conversation.

Some statements from the panel included; “Issues related to race are the main problems in America today” “We must acknowledge there is an issue.  Change must begin within our own community”, “Racism and prejudice are learned”, “Racism looks much different today than it did 30 years ago.  It’s much quieter and more subversive now”, “Things don’t happen in a vacuum – there’s always a background story that contributes to the ‘situation”, “Just because my skin color is white doesn’t mean I don’t know what it’s like to experience prejudice”, “Young men copy the looks and behaviors of bad role models they see in various forms of media.  They become guilty by association with everything negative about those characters and they are feared by others who assume if the individual has the look, they will also act out the behaviors”, “These problems are caused by breakdowns in the family and in the community.”

Those in attendance broke into several groups and discussed these various issues.  Solutions offered were: Teach individuals how to act when encountering police officers; Establish a Citizen’s Police Academy where community members spend time with police to learn about laws and do ride alongs; Continuation of the Police Youth Program; Updating police policies and procedures; Neighborhood cleanups like Project Oasis; Intervention programs like Jail-to-Jobs and Drug Court; and, of course, more “Bridging the Gap” meetings.

Pastor Young stated “When people don’t care, they don’t want to look for solutions.  There must be Involvement, dialogue, strategy, and mobilization.”  Marisue Zorens said “We need to get out of the status quo, because the status quo is often apathy and hopelessness.”  Folks in Ferguson must feel pretty hopeless right now; but not us in the community of New Castle, PA.  We’re being proactive and doing exactly want Young and Zorens said because that’s what wise communities do.