The Force is With Us Again! 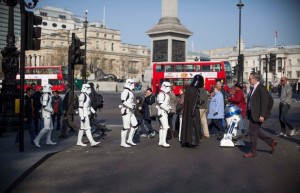 It seems space has fascinated mankind probably since the first moonrise.  Ever since man shot the first arrow skyward, his desire to fly higher has been insatiable.  Drawings and paintings of “spaceships” flying through the heavens have been part of our narrative since our story began.  We longed to touch the stars, but had to settle for only the clouds.  In 1853, Sir Walter Cayley sent his coachmen flying across Brompton Dale in Northern England aboard one of his gliders marking one of man’s first winged flights.  Ironically, powered aircraft flight and rocket powered space flight were simultaneously being pioneered fifty years later at the turn on the twentieth century.

While the Wright Brothers were researching and building their first powered aircraft in Dayton, Ohio, a Russian schoolteacher, Konstantin Tsiolkovsky, was laying the groundwork for all modern rocketry.  He developed the mathematics necessary for rocketry and pioneered the idea of multistage rockets used for carrying people into space.  To commemorate the 100th birthday of Tsiolkovsky, Russia launched Sputnik I in October of 1957.

Our fascination with Tsiolkovsky’s work, and that of other astrophysicists who followed him, is what led to the creation of the space themed genre in science fiction literature and films.  The first movie to portray the basics of rocket travel was the German science fiction silent film “Frau im Mond” which premiered on October 15, 1929.  Several other space themed movies and television shows followed, the most notable of which were the Flash Gordon and Buck Rodgers television shows that aired in the early 1950’s.  From there, we were “Lost in Space” in 1965. Roddenberry’s “Star Trek” TV series went “where no man has gone before” in 1966.  Then, in 1977,everything in space changed; Star Wars Episode 4: A New Hope premiered!  We learned about “The Force” and that force kept us wanting more Star Wars action for decades as we eagerly waited for episodes 5 and 6 and the “pre-quels” – episodes 1, 2 and 3.

10 years have passed since the theater release of the last Star Wars movie, Episode 3 “Revenge of the Sith”.  I started to think the story had ended with the bad guys winning.  What a terrible way to end the galactic ride that started way back in 1977!  Then, in 2012, fans were given new hope (not “A New Hope” – that was Episode 4) .  George Lucas sold Lucasfilm to Disney and they immediately went to work on Episode 7 “The Force Awakens”.  Finally – the adventure could continue!

To celebrate summer and share the excitement of the new Star Wars movie with the community, First Presbyterian Church in downtown New Castle will be hosting free public showings of Episode 4 “A New Hope” – otherwise known as “Star Wars” on June 12th, Episode 5 “The Empire Strikes Back” on July 10th and Episode 6 “Return of the Jedi” on August 14th.  The movies will be shown at dusk, around 8:30pm, in the parking lot behind the church at 125 North Jefferson Street.  These evenings should prove to be fun as some Star Wars moviegoers are known to show up to screenings dressed as their favorite Star Wars movie characters and some fans even dress up their pets!  Space fans rejoice and grab your lightsabers – The Force is with us again!