Have a Slice of Pi 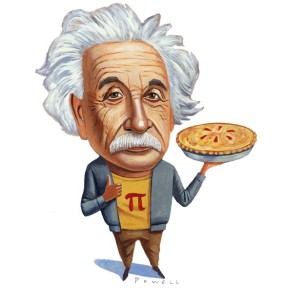 They say “Pi R Square”, but I’ve always found it to be round. I love pie, but Pi – not so much.  I cannot express my dislike of it.  You could say the thought of Pi makes me irrational.  It makes my thoughts go in circles.  Did I mention that I love pie?  Mathematicians like to express Pi as equal to C over D.  I would like Pi better if it were expressed as equal to ice cream over crust.  The area of a pie plate is in direct proportion to my appetite for pie.  The lack of notes in my geometry books is in direct proportion to my lack of interest in Pi.

Some of my math-smart friends are more into Pi than I am into pie.  They tell me “Pi” is the English spelling of the sixteenth letter of the Greek alphabet and that the symbol for Pi is derived from the first letter of the Greek word “perimetros” meaning circumference.  This makes sense since the number Pi represents the ratio of a circle’s circumference to its diameter.  The number Pi, which has a constant value that approximately equals 3.14159, is an irrational number; a real number that cannot be expressed as a common fraction and it has an infinite or endless decimal representation, without any repeating pattern.

People who love math and happen to have a lot of time on their hands have come up with something called the “Pi Code”.  I immediately thought they had cracked the code to the security system at Marie Callender’s, but I was incorrect.  The “Pi Code” is an alphanumeric (base 26 or base 27) system by which the digits in Pi, when taken out to a place value of several billion, can be converted in letters of the alphabet and thus reveal words – a giant word search puzzle if you will. The fictional character “Doctor Matrix” (introduced by Martin Gardner in 1960) used to say “properly interpreted, the number “Pi” contains the entire history of mankind.  On the other hand, I know Marie Callender’s contains a lot of pie.

I like to fly in hot air balloons and, like me, my balloon pilot friends like pie.  However, they LOVE their Pi Balls.  A Pi Ball, shot for pilot balloon, can tell you more about the precise launch site weather and winds than just about any app.  This low-tech tool is simply a helium balloon which is released prior to the balloons going up.  We watch the speed and direction of the balloon’s ascent very closely to gain an idea of where our balloons will go once airborne.

With all this love of Pi, it makes sense that March 14th, or 3/14 or 3.14 has become internationally known and celebrated as Pi Day.  On this day, love is all a-round, and a-la-mode.  It also happens to be the birthday of renowned theoretical physicist, musician, artist, mathematician and all-around brainiac Albert Einstein.  I have a theory that we would all gain a relative amount of energy from wishing Dr. Einstein a happy birthday whether it be by enjoying some pie, or some Pi.  Just be careful to keep an eye on your circumference and diameter because those can be affected by pie.