Posted on April 9, 2017 by curtsavagemedia 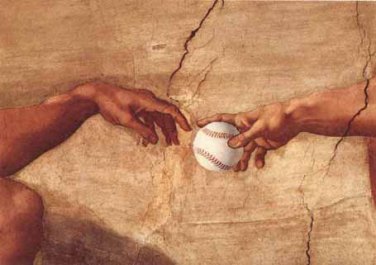 It’s almost Easter and that means it’s also baseball season!  My daughter and I have tickets for some of the Pirates games this year and I can hardly wait!  There will be nachos and hot dogs and ice cream…and lots of baseball rules I’ve yet to fully understand.  We’re going to try to learn “score keeping” this year.  We got matching transistor radios for Christmas so we can catch some extra commentary to help us with that.  One thing I may never understand about baseball though is the sacrifice play.

Take the bunt for example.  A squeeze play happens when a batter lays down a sacrifice bunt in order to get a runner home from third base.  The ball must be tapped lightly and laid down in a slow roll along the first base line.  The perfect bunt remains in fair territory in the infield and comes to a stop about halfway to first base.  The runner on third must have enough confidence in the attempted bunt that he starts running for home as soon as the pitcher commits to the pitch.  If executed properly, this “squeezes” out all play choices except a throw to first and the runner scores.  This play is full of risk and is usually saved for late innings of close games.

Sacrifice bunts are exciting and frustrating for me at the same time.  I mean, sure – if it all works, it’s glorious.  The batter is a hero.  He earns an RBI even though he’s thrown out, and a runner who may have been stranded on base is brought safely home.  But, if it goes badly, it’s a double play and the inning – or game – is over.  Why would anyone want to settle for one RBI and a “non-hit” stat when they could’ve possibly crushed the ball into the seats and scored two runs?  They’d still be a hero right?  But, if the manager calls “bunt”, he can probably see something in the opponent’s defense that requires this special play.  The batter MUST go to the plate and do his best to make that happen because everyone, especially the runner on third, is counting on him.

I’ve never been one who liked decisions that just don’t make any sense to me – Mr. “I. Know Better”.  But sometimes, maybe a lot of times, I DON’T know better.  If life can be looked at like it’s a baseball game, I’m the guy who didn’t always listen to my “coaches” but did it my way instead; always “swinging for the fence” but seldom getting there.  Now it’s in late innings and, purely by God’s mercy and grace, I find myself on third base, but unable to get “home” unless God does something to help me get there.  Well – He already did; for everyone.

Jesus willingly going to the cross for me was the ultimate sacrifice bunt.  The Jewish people were all looking to Him to be their Home Run King – the guy who would hit that bottom of the ninth, bases loaded grand slam; the one who would rally them to beat their opponents and lead them to glory; He was certainly capable of that.  Instead, God called down the play.  Jesus followed His batting instructions by spreading his hands apart on that wood and laying down the perfect bunt, sacrificing Himself so this sinner could make it safely home, sliding into Heaven on a squeeze play; and the angels in the stands rejoiced!