Posted on December 29, 2014 by curtsavagemedia 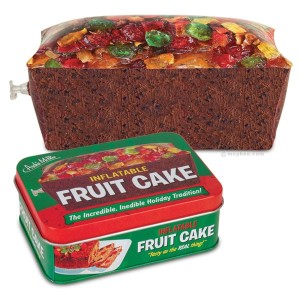 Regifting; I’ve heard of it, but I don’t know that I’ve ever done it.  Apparently, there are rules of etiquette one should follow when regifting.  The Emily Post Institute says regifting is alright in the right context.  They advise an item should be regifted only if it’s brand new and in its original packaging.  The gift shouldn’t create an awkward situation when given; it should be something that the recipient would actually want.

Protocol expert Louise Fox says gift givers should be very cautious when regifting; that we should never regift heirlooms or handcrafted items.  Again, Fox agrees with other etiquette experts in saying only regift if the item is something you would have bought the recipient because of their tastes or likes.

So – name the gift that immediately comes to your mind as a regifting candidate.  Fruitcake, right?  The poor fruitcake receives the brunt of most Christmas gift jokes.  Next would have to be that awesome sweater with the tags still on it that lies in the bottom of your bottom wardrobe drawer.  Third place would go to the personal fragrance gift that caused your cat to run away when you opened the package last year.  Last place would go to the objet d’art given by one of your youngest relatives; that nice, life-size piece that won’t stand up by its self and is too heavy to hang on a wall.

There.  I think we just broke every regifting taboo spoken of by the Emily Post Institute and Louise Fox.  Sometimes though, I think it’s appropriate – even important – to break the regifting rules, especially with reference to heirlooms, handcrafted items and yes – those objets d’art.  Friends have given me gifts that were given to them by others who were known by both of us.  These things are some of my most treasured possessions because of their sentimental history.    I had a neighbor who received a 1955 Ford pick-up truck as a Christmas gift from his father and then gave that same truck to his own son one Christmas.  How wonderful to pass along a gift while still alive to enjoy the act of giving!

This might be where regifting becomes a little confusing; maybe even counterintuitive.  Why would you want to give away something you really wanted to keep?  Come on; admit it.  Haven’t you, at least once, bought something to give as a gift and ended up liking it so much that you decided to keep it for yourself?  I’ll ‘fess up.  I bought an R/C car for someone’s gift, got home from the store and took the car out for a spin – strictly a “test drive”, then put it back in the box and wrapped it.  Guilty.

Then, there was this unique gift I was given.  I didn’t ask for it.  I thought about refusing the gift because I just didn’t think it was me.  I put it aside without even opening it.  I didn’t try to regift it because it would just be too awkward to give to someone else if I didn’t like it myself.  After a few years, some life events provoked me to find the gift and open it.  The gift was a bible.  What I found inside was everything I ever needed but couldn’t find elsewhere.  I can give The One I found in this gift to others but never lose Him.  He always remains with me.  That’s why Jesus is known as “The Gift That Keeps on Giving”.  Merry Christ-mas.