Digging for the Pony 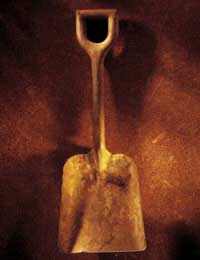 My mom shared something with me many years ago that radically changed, and possibly saved my life.  I was going through a rough spot in my career and was drowning under criticism and self-doubt.  Frankly, I was becoming very negative and bitter.  Her anecdote changed all of that.

A mother had twin sons.  Genetically, they were twins.  That’s where the similarities ended.  One child was always pleasant, and the other always difficult.  One was always happy and positive no matter the circumstances; the other always a thunder cloud full of negative ions waiting to emotionally explode.  Naturally, the two siblings were in a constant state of turmoil and tension between themselves and their poor mother found herself increasingly at her wits end.  She decided the only way to restore some sanity to her home was to seek professional counseling.  Maybe a psychiatrist could determine why the boys were emotional opposites.

While in the examining room, the boys were in full character.  The doctors held their chins and shook their heads.  “We’ve never seen anything like this” they told the boys’ mother.  They pinched the boys’ necks, stuck scopes in their ears, shined lights in the boys’ eyes, bonked their knees with rubber hammers and even turned the boys this way and that and end over end.  Nothing offered an explanation.  The one boy seemed to enjoy it all and the other hated it before it even began.  Finally, after much consideration, the doctors exclaimed “We have an idea!”.

The doctors modified and outfitted two observation rooms.  Their goal was trick the boys into experiencing emotional reactions opposite of their normal personalities.  They placed the unhappy brother in brightly painted room #1 and filled the room with video games, toys, candy, ice cream, a merry-go-round and a puppy.  The happy brother was dressed in a waterproof suit complete with hood, boots, gloves and goggles, and placed in room #2; a dimly lighted room with no sound or contents except enough horse manure to bury the boy up to his neck.  Now the doctors and the boys’ mother listened from outside the rooms and watched the boys through two-way-mirrored windows.

Within minutes it became evident the experiment wasn’t working as planned.  Crying and loud complaining emanated from room #1.  The doctors spoke into the intercom “Son.  What’s the matter?”  The miserable boy replied “This is terrible!  I don’t like these games, I hate the color of these walls, I have to use the money you left me to make the merry-go-round work and the puppy is begging for the ice cream – the flavor of which I do not like by the way!”.  The doctors were dumbfounded.  They switched the listening speaker to room #2 and heard the boy happily whistling.  The doctors asked “Son.  Is everything okay?”  “Yes. I’m fine” replied the boy.  “Do you want anything?” asked the doctors to which the boy simply replied “No.”  A few moments later the boy declared “On second thought, there IS one thing I’d like.”  The doctors thought they had succeeded in breaking him.  “What would that be?” the doctors asked with anticipation.  “A shovel please” replied the boy.  “Why a shovel?” asked the confused doctors. “We’ll, I’ve been thinking.  With all this horse manure, there must be pony underneath somewhere and I’m going to dig until I find it!”