Posted on July 4, 2017 by curtsavagemedia

On America’s Independence Day, I’m contemplating the kind of freedom the Bald Eagle exemplifies.  Agur, the son of Jakeh, wrote in the Bible’s 30th Proverb “the way of an eagle in the sky is too amazing for me to understand”.  I agree with Agur.  Bald Eagles usually fly alone, can achieve speeds approaching 75 miles per hour and can soar to altitudes of up to 15,000 feet enabling them to fly over all but the highest mountain peaks in North America!  Their beautiful but fierce appearance and strength make them a great national symbol for America. 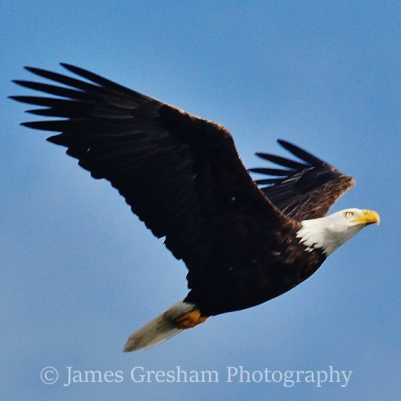 My friend James Gresham lives in Washington State and is an amazing wildlife photographer.  His marine bird and Bald Eagle photos are some of the best I’ve ever seen.  With Bald Eagles nesting in Lawrence County now, I’m hoping to get a chance to take some of my own raptor photos.  While leaving church a couple of Sundays ago, I noticed a Bald Eagle gliding overhead, flying toward the Shenango River.  Considering the bird’s astonishing eyesight, it may have had an eye on a fish miles upstream.  It certainly wasn’t concerned with anything near me.  The eagle didn’t make a sound or flap its wings as it glided higher and father away until I lost sight of it.

While writing this, I heard familiar music on our street and ran out to get an ice cream sandwich from our favorite ice cream man Kevin Henry.  He and I got to chatting about how we both see so much of society when we’re driving around on our routes; some good things and some bad.  We both agreed it’s difficult to avoid getting bogged down by all the negative and easy to miss all the positive out there.  We must choose what we’re going to focus on.  This reminded me of that Bald Eagle from Sunday.  We considered how eagles fly high above all the little stuff on the ground and don’t get entangled in all sorts of things that could prevent them from flying.  If only we could “mount up with wings as eagles”.

The Steve Miller Band released the single “Fly Like an Eagle” in 1976.  This song has been used in more “freedom themed” commercials than just about any song I know of.  However, the “freedom song” contains an important message to catch.  In the lyrics are the words “Time keeps on slippin’ into the future.  I want to fly like an eagle, ‘till I’m free, Oh Lord through the revolution.  Feed the babies who don’t have enough to eat, shoe the children with no shoes on their feet, house the people livin’ in the street, oh, oh there’s a solution.”  With freedom comes a responsibility to use that freedom for unselfish ends; a responsibility to pursue freedom for those who don’t have it.  We should never take our freedom for granted.  Time is slipping away for hundreds of millions of people struggling to be free from hunger, poverty, slavery, oppression and persecution; people who are sometimes literally dying to taste our freedom.  This Independence Day, I hope our bonfires and fireworks illumine our minds with ways we can help those less fortunate to mount up with wings and fly free like eagles.